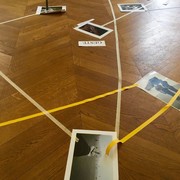 Pragmatics : Practice : Praxis is a three-day workshop that brings together artists and researchers from Europe and Australia. Its aim is double: first to explore how different forms of practice are deployed and given value in the fields in which we work; second to create space for cross-fertilization and experimentation by sharing, transferring and then implementing researchers’ established methods and tools, thus producing new hybrid models of practice.

The final session of the workshop is open to the public and consists of a performance called “Living Corpus” which take place as a kind of result of the workshop. It is an organized game based on a simple protocol that assembles texts, gestures and images from the workshop. The consequent ‘corpus’ is then activated at a corporeal level via a constructive and collective installation or schema. “Living Corpus” is a experimental research method used by the Laboratoire du Geste team (the Gesture Laboratory) co-directed by Barbara Formis (Senior Lecturer in Philosophy of Art at the Sorbonne University) and Mélanie Perrier (choreographer and Senior Lecturer in Fine Arts at the Sorbonne University), who invented the game.