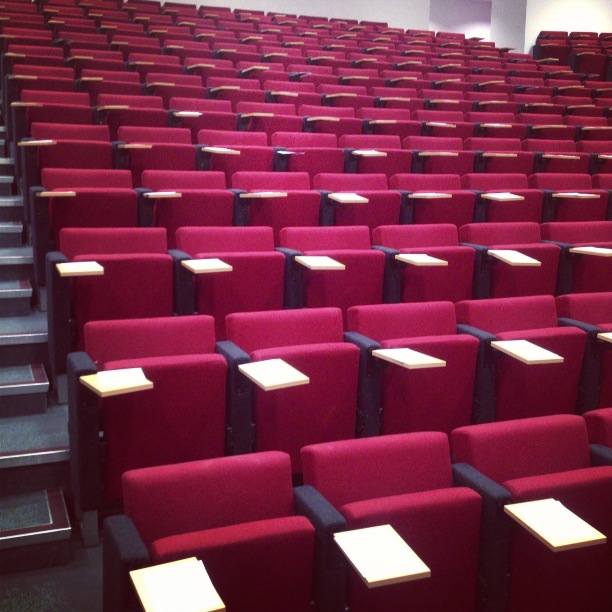 “On the information sheet in a New York hotel, I recently read: ‘Dear guest! To guarantee that you will fully enjoy your stay with us, this hotel is totally smoke-free. For any infringement of this regulation, you will be charged $200.’ The beauty of this formulation, taken literally, is that you are to be punished for refusing to fully enjoy your stay … The superego imperative to enjoy thus functions as the reversal of Kant’s “Du kannst, denn du sollst” (You can, because you must!); it relies on a “You must, because you can!” That is to say, the superego aspect of today’s “non repressive” hedonism (the constant provocation we are exposed to, enjoining us to go right to the end and explore all modes of jouissance) resides in the way permitted jouissance necessarily turns into obligatory jouissance.”

During the performance philosophy conference I collaborated with a friend and colleague in presenting a performance. Our performance was that of an invitation, an invitation to be silent during the breaks in speakers, we wanted to explore the notion of silence for a number of reasons. We were particularly interested in the notion of a community and how a community can shape an individual’s response (arguably, an individual is already multiple). We felt that, having experienced conferences as people with no experience of presenting at one, and perhaps, in my own case at least a fear that we need to affirm our understanding during these breaks. We knew that silence was something interesting to explore (particularly in this context) as we knew that this was destined to fail, almost instantly.

Our invitation was distributed in the form of a leaflet, left on chairs before the first keynote speaker began. On the front of the leaflet there were two instructions;

1. Please join us in being silent in the breaks between speakers.

2. Please turn over for more information.

On the following two pages of the leaflet there was an essay which contextualised the task (we were later told that this essay may have been too long for people). However, it was only an invitation for further context. The leaflet did not contain our names - as we wanted this to be anonymous. Hence why we had made the decision to leave the instructions on the chairs and to not interact with the conference participants.

Almost instantly, and expectedly this failed. People did not choose to take up the invitation for a number of reasons I believe. The first of those reasons and probably the most significant of all refers back to the notion of community and belonging. Perhaps, a conference is a place where people come in order to talk to one and other; there is certainly a sense that dialogue is a key aspect of learning and understanding. It is also important to point out that many of the people at this conference (and many others) are actually friends, people they may have met at other conferences, people they may have encountered throughout different stages of their careers. So it was clear that this was always going to be the outcome in as much that talking was the norm and to not talk and to seemingly be doing ‘nothing’ would of meant that you would of being actually doing something very specific and excluding yourself from this networking experience.

Katheryn and myself both attempted to stay silent throughout the first couple of breaks in the conference, this was made difficult when performing the most simplistic of task. Asking for a cup of coffee and saying thank you without words and not wanting to appear very rude, proved extremely difficult. It was this need to talk in order to get what we wanted in the most simplistic sense and a need that we felt in order to talk to express a given emotion or response to a speakers comments. We found that in order to be able to concentrate and stay focused by expressing an emotion, we are able to move away from it (in some cases this is not true).

During the first break we were communicating to one and other through text messages until we decided that we did not want to do this either and that this was a form of non-verbal communication so we decided that we would turn our phones off and not use those. One of the reasons that we had thought about the notion of silence was to realise the idea of freedom of thought that did not need to be vocalised. However, it became clear to me that there was a number of different ways that one could feel like they had to justify their own intelligence in this case; once vocalisation was no longer an issue it became more about the written word. Watching Katheryn writing down lots of notes I felt like I had to do the same in order to show that I was understanding what was happening and that I had something to say about being silent. I’m not sure I did but I wanted to express that I felt like I had to do the same, as we were both doing the same task.

Speaking to people about the performance at the end of the second day, it was clear that people had read the invitation and one person had said that they were shocked that nobody had gone along with it. They also said that they thought that it was something that the organisers had put into place or that it was a handout to form a part of somebody’s paper. This was due mainly to the fact that we chose to not sign our names onto the invitation. We did not identify ourselves with the invitation; instead we chose to have it sat anonymously at the start of the conference. We felt that had we wrote our names onto it this would give it a sense of being authored and that people would be more likely to go along with it as it would then be somebody’s work which would lend itself to people feeling more obliged to take part. The purpose of invitation was to experiment with how people behave when they belong as part of a ‘community’. I think that the experience was useful and we will have no way of understanding to what extent the invitation made people think during the conference perhaps they thought about affirmation? Perhaps they thought about staying silent?