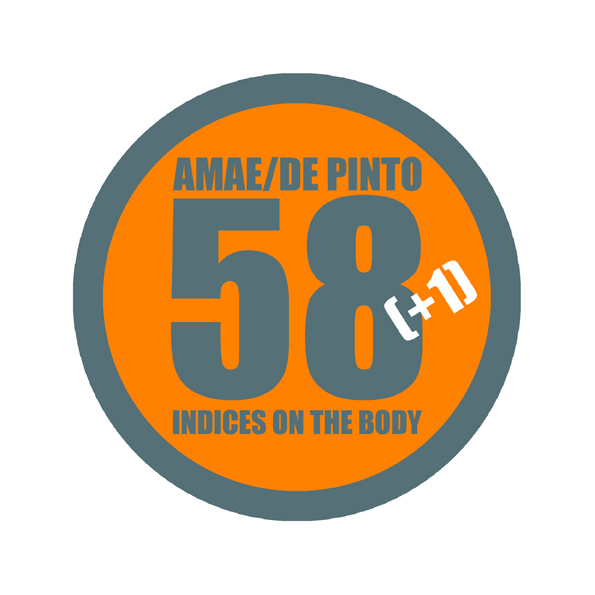 The topics come from the treaty 58 indices sur le corps (Editor’s note “58 indices on the body”), written in 2006 by Jean Luc Nancy and related to his book Corpus.

The project has a blog: http://58indicesonthebody.wordpress.com/

This blog is the ideal platform to collect all the ideas, images, videos, texts and documentation of other nature this collaboration will produce through the exchange between all people involved.

Mr. Nancy wrote exclusively for the project four new post-indices from 60 to 63. (the 59 was already added in the original text).

The philosopher Jean-Luc Nancy agreed to record himself reading the whole of the 63 indices and offered to the artists of 58(+1) Indices on the body an exclusive copyright.

The recording, a 45-minute session of slow reading, has been made in French which is Mr. Nancy’s native language and it will be used for further developments in 2014.

Recently AMAE and Pier Giorgio De Pinto started an audio project on soundcloud in which they are collecting all the audio that Mr. Nancy has recorded for the project. Every Thursday they share a statement with the audience and they let people post comments along the track.

AMAE Art Collective as a collaborative singularity, AMAE focuses on the tensions generated in marginalised bodies by heteronormative society. Amae’s research contaminates traditional languages of art communication (poetry, video, sound, photography, installation, performance) with mass media via photographic works and performances, which are often broadcast live on the web. Working on international platforms across the EU, AMAE focuses on intersubjectivity and transfer in performance art; inheritance and mimicry of behaviour; mimicry against emulation; identification and conflict; primary society and contemporary society; time and space of assimilation of empathetic behaviours; behaviours towards otherness; transient bodies; augmented reality.

Pier Giorgio De Pinto (born 1968) - is a trans-disciplinary artist, curator, theorist and media trainer. De Pinto concentrates on new media in which he involves the audience, creating performative experiences and immersive environments. Mapping the body as personal genius loci (spirit of the place) referenced to a clearly identifiable psycho-geography is one of the topics on which the artist is working, while drawing thematic inspiration from the television and cinema scene, as well as from the social environment.

Born in Bordeaux, he studied biology and philosophy at the Sorbonne. Nancy is Professor Emeritus at the Université Marc Bloch in Strasburg. He has also taught philosophy in Colmar, Berlin, Irvine, San Diego and Berkley. In 1995, he was awarded a Chevalier Order in recognition of his services to French culture.

Nancy makes frequent reference in his work to the philosophy of Jacques Derrida, with whom he was a co-creator of the deconstruction movement in philosophy. Derrida, in turn, wrote the book Le Toucher, Jean-Luc Nancy (On Touching—Jean-Luc Nancy, 2005) about Nancy. Nancy is also the author of analytical works on such classics as Hegel. The books Corpus or Corpus II belong to a rather different category, as they have the character of poetic philosophical reflections in which Nancy focuses on human corporality and its sense.