The project Playing with Virtual Realities takes place in the research group gamelab.berlin, at the Excellence Cluster an Interdisciplinary Laboratory, Humboldt University of Berlin.
The project explores how VR-technology and the embodied practices of gaming and dancing enact and design imagination and perceptual experience. The project is a collaboration of gaming, dancing, VR design, philosophy of technology, embodied philosophies of perception, and performance philosophy.

Playing with Virtual Realities questions and experiments the embodied practices of dancing and gaming. We inquire how physical techniques and technology of the game provoke and solve challenges for perception. We aim to reflect the intersection of technology and technique within processes of design.

Both VR design and dance techniques deal with the challenge of how to facilitate an immersive experience that imitates the fluidity of everyday life behavior, while both dancing and gaming are embodied practices that transgress everyday patterns of movement and perception.

Dancing is a design of space, rather than merely acting within an already given realm. Thus, dancers “methodically” ignore the real space and relate their decisions of movements according to imaginary rules of game. At the same time, dancers lead their movements according to what the actual space and their physical capacities enable. Integrating the actual and the virtual, dancers constantly further shape and extend their actual movement capacities. For those reasons, we see in the aesthetic labor of dancing a source for researching creative patterns of perception. Thus, the trained dancers hold an archive of knowledgeable techniques for movement, imagination, perceptual problem solving, and creativity.

In addition, the most recent developments of VR design enable for the actors within the virtual reality to see and act within an imaginary world that visually comes into life. Nevertheless, the rest of the physical senses, especially the sense of equilibrium, proprioception, and the sense of touch act according to the actual space, which is beyond the virtual vision. For those reasons, we see in VR technology an interesting case of extended cognition (see Andy Clark and David Chalmers, 1998) that affects not just the visions and the patterns of movements of its actors, but also their perceptual schemata and their embodied techniques.

In Playing with Virtual Realities we research the relationship between vision and movement, as well as the cognitive, physical, and perceptual challenges appear when vision and movement are dissociated. We deal with the role of imagination in designing new ways of knowing and with how imagination and a virtual realm enact actual perception within creative experience. 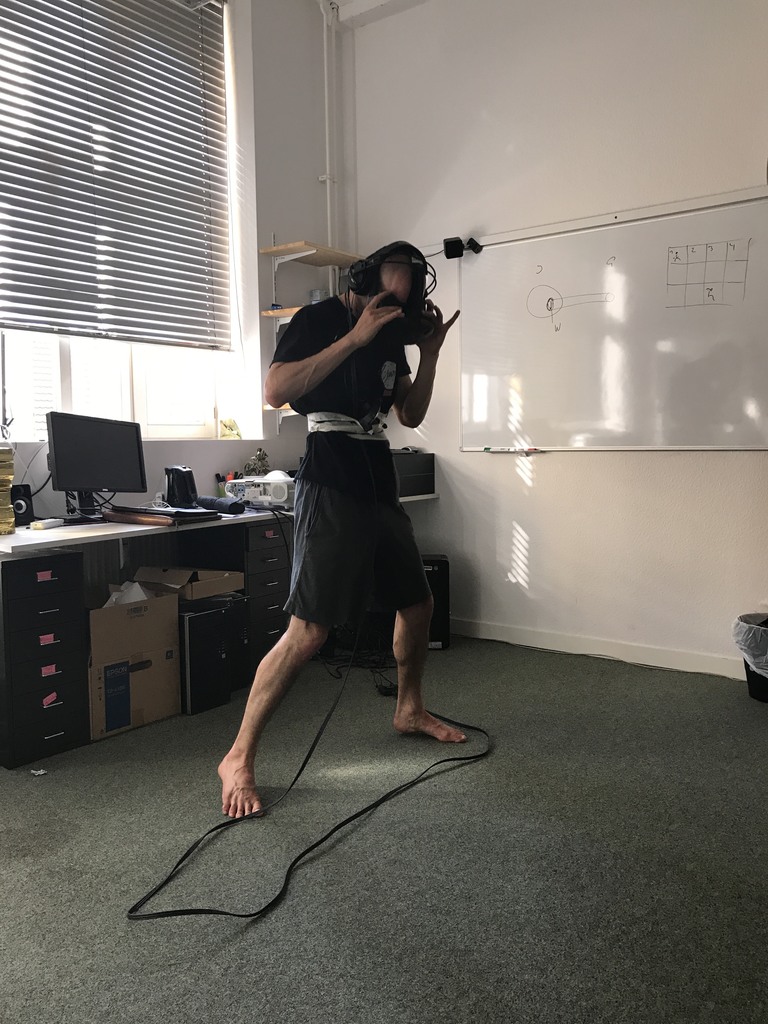